How to Teach Students Creativity

You can’t teach students creativity the same way you can teach algebra or reading. But research shows that creative thinking can be developed and nurtured over time, similar to a growth mindset. The key is to recognize how creativity develops and create environments that foster creative thinking. Mindprint’s FIVE steps to creative transformation 1. FOUNDATION  There is no substitute for a deep foundation of subject-specific content knowledge. The more you know about a topic, the more chances there are to see opportunities. If we want students to be creative thinkers, it is essential that we continuously expand their knowledge base and fill in any gaps that arise along the way in core, subject-specific knowledge. HINT: Students with weaker verbal memory can… Read More 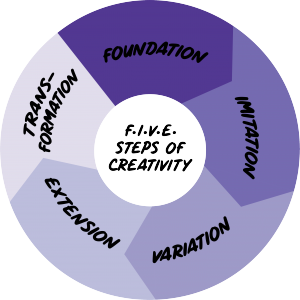 Can America’s ‘lost Einsteins’ be found more easily than we think?

Are we looking for the ‘lost Einsteins’ in the wrong places? Research suggests we should be looking at students’ spatial and flexible thinking skills, not math and science scores. Who are the ‘lost Einsteins’? Late last year the The Equality of Opportunity Project released a report concluding that the U.S. is losing out on as much as 400% of innovation potential by failing to effectively nurture under-represented minorities, i.e. Blacks, Latinos, and girls. The report states, “there are many ‘lost Einsteins’ – people who would have had high-impact inventions” but never do because they grow up in communities where math and science in general, and innovation specifically, isn’t fostered. Stories in the NY Times and The Atlantic among other outlets fueled the social media discourse about an educational system… Read More

Are Your Students Prepared for the WEF’s “4th Industrial Revolution”?

Read and learn how you can make sure your kids are prepared for a lifetime of success. Experts from the World Economic Forum believe that over 1/3 of the most important workplace skills will change over the next five years. That’s an incredible rate of change. While schools are focused on meeting these needs, there’s a lot parents can do to strengthen the skills that will be critical to their child’s lifelong success. Top 10 Ways to Nurture the World Economic Forum Top 10 Skills: Know your child’s stronger and weaker skills. Keep in mind that these skills develop at different rates, and you should expect a child to be stronger in some areas and weaker in others.* Focus on retention. A strong general knowledge base remains essential for critical thinking…. Read More